Learn all about it here!

Eunice and I really like dogs. They have always been a very important part of our life. We like all kinds. Trial dogs are wonderful, but so are farm dogs, ranch dogs, herding dogs and livestock guard dogs. When people ridicule working dogs, I will stand up for them.

They have done so much for us over the years.

When the top trial dogs are compared to what people think are the worst ranch dog, the ranch dog looks pretty bad. What if we compared the best ranch dogs to the worst trial dogs? Many people don’t realize what is the best ranch dog. In some areas, the best dog you can have is one that will stop cattle or sheep and bring them back, or hold them until you can get there. There are lots of good dogs that can’t do this in the rough country I am talking about.

People who believe that only trial-trained dogs are good stock-dogs constantly comment on my belief in “untrained” dogs. This is certainly not the case. As soon as I indicate where we are taking the stock my dogs are trained to take their “commands” from the livestock not from me. Let me take you through a typical September day here at Vee Tee Feeders. The cattle I am talking about weigh between 500 and 850 pounds. I am on foot with one or two dogs.

Pen #30. Pull 700 head of cattle out of the pen. Drive them ¼ mile, through a gate. Down one mile of lane fenced with a single electric wire into a 200-acre field.

Pen #39. Pull 300 head of cattle out of the pen. Drive them ¼ mile, through a gate in the middle of the fence and leave them in a 40-acre brushy canyon.

Pen #48. Pull 600 head of cattle out of the pen. Drive them ½ mile across the field, through a gate in the middle of the fence into an 80-acre brushy canyon.

Gather 700 head of cattle from a 200-acre field, through a gate in the middle of the fence into a mile long lane fenced with a single strand of electric wire, ¼ mile across the field into pen #30.

Gather 600 head of cattle from an 80-acre brushy canyon, through a gate, ½ mile across the field into pen #48.

This doesn’t take very long. I have a lot of other things I take care of through the day besides these cattle moves. When I open the gate to the pen, I go on ahead. The dogs must move the cattle out with no direction except the gate being opened and being sent from there. Some of the gates are not at the back of the pen. The dogs must bring the cattle out and curve them to come to the right direction. I am confident they will not bother the cattle in the adjoining pens. When I am ahead of 700 head of cattle, the dog or dogs are back there quite a distance. I must be in the lead to open the gates at the road, and to be in position to guide them across. I can control one side of the road, the dogs bring the cattle and watch the other side of the road.

For a couple of weeks in early September, the trucks are hauling manure out to the fields. With three loaders and ten trucks running, there is a truck going by every minute. I think they said this operation cost the feedlot about $12 per minute. I was able to make all the above moves without holding the trucks up over five minutes total in the entire two weeks. This was not done with “untrained” dogs, even if they don’t know “down, way to me, come by, walk on etc.” What they do know is how to move stock and keep the animals under control.

As soon as things freeze up this winter we will bring the cowherd out of the Bush Country where they have spent the summer. We have one eighty-acre feed/water area that we use for two sets of cattle. This is how it works. In the winter the days are pretty short this far north. The feed truck starts running at daylight and I must have the cows out of this eighty acres before then. I will drive up to the gate and send the dogs. They gather the pasture in the dark. Even though most of the cattle are bedded down against the feedlot pens, the dogs never go through the fence and bother the cattle in the pens. When the temperature is minus 40 degrees, the cattle aren’t always too eager to get up and face into a blizzard. These cattle are taken to a field with a straw bed where they spend the day. There has not been one time that the dogs left a single cow. 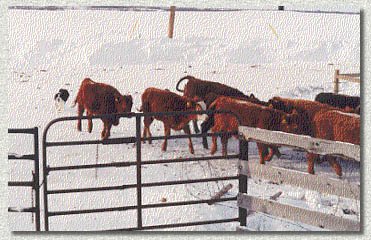 After the feed truck comes in and fills the bunks, I go across the road to let the 600 head of yearling cattle in from their bed ground. Sometimes there are a few cattle at the gate, but most of them are on their straw bed and in the 20-acre brush patch that surrounds it. I send the dogs from the gate. They go a half-mile to the bed ground and gather all the cattle and bring them at a walk to me at the gate. I have to stand at the road to make sure they don’t miss the gate on the other side, and to check for sick animals. If I see an animal that needs to be treated, I will turn it down the road instead of letting it go through the gate. After the dogs bring the last animal through, we take the ones we have cut out up to the feedlot.

If you have never tried to make 600 head of cattle leave a cozy straw bed in the middle of an Alberta winter, believe me, it takes a dog or two that understands how to work cattle. When you consider that these same dogs also have to bring the cattle along gently so the sick ones are not unduly stressed, you really get to appreciate a good dog.

In the afternoon, these cattle are sent back to their bed ground for the night and the cows are brought back to clean up the feed bunks and have access to water until morning.

Maybe by now you will start to understand why I get defensive when someone says “yes, but. . . he would be a lot better dog if you had more CONTROL.”

This is part of a letter we got last year from a friend of ours in Northern California. Bob is a veterinarian and has always been interested in stockdogs: “. . . .If you haven’t already heard, the highest priced dog in Red Bluff sold for just $200 less than the Champion Hereford bull. $4800 I believe. The sad truth is that I don’t believe there was a dog there that was as good as most of the dogs you had here. Certainly nowhere as good as the better ones.”

I am not trying to convince anyone that there is anything wrong with trial-type training. All I’m saying is that there are people who want and need a working dog which, for one reason or another, the trial type dog is not suitable. Whether it is the dog or the man is immaterial. When I am working large numbers of cattle or sheep with a dog, I have a job to do. If I position myself where I can see the dog in order to tell him how to do his job, I can’t do mine. Further more, I have found that if I allow my dog to use his God given talents he knows better than I how to best move the stock.