Learn all about it here!

(Submitted to The Ranch Dog Trainer in answer to “Letters” disagreeing with “Ranch Dog/Trial Dog.” They didn’t publish it.) 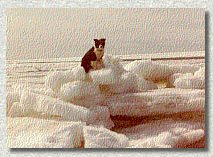 It is interesting to me that if someone writes about a working dog that is not trained with all the commands and control of a trial dog, this dog will be ridiculed as half trained, sic’um/get back or as an untrained dog of yesteryear (I like this one). If someone writes that there maybe some ranch work that a trial trained dog may not do as well as an “untrained dog of yesteryear” (I really do like this one), then the writer is put down.

Here are two stories about some “Untrained Dogs of Yesteryear.” These stories are absolutely accurate.

In October of 1960, Eunice and I set out to bring in some cattle for a rancher in Northern California. His gather was short by 15 head. The ranch was about 30,000 acres of rough mountains, timber and brush. These cows were wild and would take off when they heard you coming, long before you could see them. All of these cows had horns and knew how to use them. It took a strong, agile dog to be able to handle them. He had to have a lot of cow-savy too, or you were liable to wind up with fifteen bunches of one, instead of one bunch of fifteen.

Top and Scotty were the two dogs we had that day. Top was a five year old McNab that had worked very little when I got him about five months before. Scotty was a Border Collie that was given to me by a breeder we used to buy a lot of pups from. They had sold him as a pup, but he was returned to them for various reasons. These dogs only knew “Get Ahead” and “Come.” We rode about fifteen miles before coming across fresh cow tracks. I told the dogs to “GET AHEAD.” They took off following the tracks. In about thirty minutes we heard the dogs bark. They were about two miles away across two big canyons. The only place cattle could cross was at the head of these canyons. We had to travel about three miles to get around to where the dogs had the cattle held up. They would bark once or twice every few minutes, which is how we were able to find them. It took us at least an hour to get to them. They had all fifteen head waiting for us.

When I called the dogs off, the cows took off on the run. We kept up as best we could, which wasn’t very good. Because of the brush we were lucky to be able to see a couple of hundred feet. When the trail forked we could tell by the tracks that the cattle had taken the wrong fork. We sent the dogs to bring them back. Eunice and I turned them down the right trail and again they took off at a dead run. This time Scotty went with them. When we finally caught up, Scotty had them held up at the next fork in the trail. When we got them going the right way, Scotty was off again. Every time we came to a fork in the trail, or an area that Scotty wasn’t sure which way they should go, we would find him holding the cattle until we could catch up. This continued until the cattle would travel at a pace we could keep up with. By the time we got them back to headquarters, they handled pretty nice and we didn’t have any trouble putting them in the corral.

Eunice and I used to make our living gathering cattle and sheep that other people couldn’t get in. After the dogs had to bring back stock that had taken the wrong trail three or four times, they figured out by themselves how to handle this problem. We never had a dog that wouldn’t do this. If you have never worked wild stock in rough country you might not understand how much help it is to have a dog that will stay with the herd and hold them up until you can get there.

1. When I saw the fresh tracks and sent the dogs, how wide should their outrun have been, and what command should I have used? Keep in mind that just because the tracks we saw were heading east doesn’t mean that the cattle were still going in that direction. We have had cattle and sheep both take off when they hear us coming, then circle around and hide in a brush patch behind us. If you’re counting on a fence to help you, forget it, there ain’t any!

2. When the dogs stopped the cows, what command would you use to get them to bring the cattle straight to us, across these canyons that cows can’t cross?

3. If we give up on that, what command would be best to get the dogs to bark when they are two miles away, as this is the only way to find them unless you are really good at tracking?

5. What command would you use to cause the dogs to hold the cows if he doesn’t bark and you do have to track them? This might take a long time. If your dog comes back before you get to the cows, the cows might leave. Or is there a command to make the cattle wait for you?

6. When the cows took off and we couldn’t keep up with them, what command would you use to tell the dog to hold the cattle at the next fork in the trail, but don’t bring them back?

If you will please answer these questions, there are many ranchers that would be most grateful. Some ranchers I have talked to didn’t think the dogs on a wide outrun would even be able to find cattle that were out of sight and running, maybe a mile away. I convinced them that a trial dog could do anything ranch dogs do and do it better. It would be stupid to have the dog follow the tracks as this would only chase the cows further away. Anyone that knows anything about stock-dogs would know they have to go wide under any conditions.

7. Oops, another question. Should a dog never go up the middle? Even, if because of the terrain that is the only way he can get to the lead? Do we just let those cows get away?

I am so excited about maybe someday having a good ranch dog!

In May of 1975 Eunice and I were taking care of 3,000 head of yearling cattle that we had wintered on the Eden Valley Ranch in Northern California. This ranch covers 27,000 acres in the mountains. There was lots of brush, timber, logged over country and rugged canyons. Sunday evening the owner told me he would have nine trucks at the ranch on Tuesday morning to start hauling the cattle out. Monday morning, before daylight, I started out horseback with Beau, Nip and Tuck. All three were supposed to be Border Collies, but I suspect that Nip & Tuck had a McNab daddy. By 10:00 AM we had 900 head gathered and ready to go to the holding pasture eight miles away. The dogs and my horse were in good shape and could have finished out the day, but I hated to see Eunice have the whole day to herself so I told her to meet me at the top of the mountain with a fresh horse and dogs. She brought Blue, an Australian Cattle Dog, Spot, a Border Collie (Spot was a solid black dog that we thought would look better if he had a spot), and Mitzy. No one who ever saw her could guess what kind of dog she was. But they all agreed that she was as good as any cowdog that ever lived. Now, of course, I know she probably wasn’t very good. She only knew three commands. “GET AHEAD, COME and HEY” for when she was wrong. You see, in 15 years I had learned to use three commands instead of two. In the last 20 years I haven’t progressed any since three commands are still all I use. Now you can help me change that. . . .but on with the story. The elevation at the top of the mountain was 4,100 feet. The holding pasture was eight miles away at 1,300 feet. The road was fairly steep in places and quite crooked where it wound in and out of canyons. When we started down the road I wanted to be in front since sometimes the lead cattle will go faster than I want. I put Blue behind to bring the stock. His job was to keep them coming at a nice even pace. Not too fast, and not too slow. I sent Mitzy along the side to keep the stock on the road. I kept Spot with me in case of an unforeseen problem. The choice of which dog to work at which location wasn’t a problem since any of them could do any job. Once the dog understood what job he was responsible for, I never had to worry about him leaving it. Anyone who has driven 900 head of cattle on a road in the mountains knows there will be some distance between the front and the back of the herd. In eight miles I only caught a glimpse of the dog on the back end once or twice. I saw Mitzy a few more times since she was working along the side of the herd. We arrived at the holding pasture in good time and with all of the cattle.

1. If you were going to drive 900 head of cattle by yourself in the mountains, what command would you give the dog on the back. Would one command be enough since you wouldn’t see him again for eight miles?

2. Since the road curves in and out of canyons should the dog on the back bring the cattle straight across the canyon? These canyons are very rough and brushy. Would it be possible to cheat a little and let the dog bring them up the road and not straight to me or would this ruin our image?

3. I see the dog on the side once in a while. What commands should I be giving her?

If you would do it totally different, will you explain how?

To drive these 900 yearlings to the holding pasture I needed two “untrained dogs of yesteryear,” The other dog was insurance. When I get this new dog with all the training and commands on him will one dog be able to do the job? Will I even need to go along?

Most top trial dogs do make excellent farm dogs, but there are still some ranch jobs that few of them can do very well. Even if it’s such a simple thing as barking if needed. As far as I’m concerned there will always be a place for “THE UNTRAINED DOGS OF YESTERYEAR.”